No Falsies Allowed! (Or, “What is Falsetto and How Do I Deal with It?”)

No, I’m not referring to eyelashes (or to any other body part…). I’m just humorously (trying, anyways) referring to that kind of singing in your head voice that sounds thin and, well,false. That’s how it got its name, “falsetto,” or “false voice.”

Let me give you an example. I went to see Carrie Underwood in concert on Tuesday night. What a fun time! I went with three other girlfriends from church who are, like me, moms of little kids and, also like me, kind of lame in that we “don’t get around much anymore,” as the old song goes. With little kids, there’s frankly only so much you can do in a day, or even a year, particularly in the evenings. Well, another friend at church gave one of our group four free tickets on the club-box level, so it was quite the sweet deal. We were practically as giddy as the club box of middle-school aged girls who kept screaming, “We love you, Carrie!” Ahhh, the innocent, ridiculous days of middle school.

Back to the point, Carrie is a wonderful singer with a very strong, resilient voice. Her particular strength is “belting,” or singing with power and strength as high as she possibly can in her lower range, or what’s commonly known as the “chest voice.” It makes for powerful performances.

(You can read more about “belting” on Wikipedia here (http://en.wikipedia.org/wiki/Belt_%28music%29), if you’re interested.)

I’m not categorically against “belting.” As I mentioned before, it can produce a really dramatic effect. The problem arises if a singer focuses primarily on that to the exclusion of developing the upper range, also known as the “head” voice and then connecting the two.

Several times during the concert, I heard Carrie sing in her upper range with some modicum of strength, but nothing compared to what I think it could be. What tends to happen, and what happened a few times during Carrie’s concert, is that the singer can sing these amazing belted notes; but when it comes to going above the highest notes that singer can produce by belting, she has to “flip” into this thin, wisp-of-a-voice. It lacks power, it is usually very breathy and it overall doesn’t do the singer justice.

The singer typically just isn’t in touch with or hasn’t developed the “head voice” as much as it could be developed. And, typically, the singer is uncomfortable or unfamiliar with how the head and body feel when resonation of the voice is primarily taking place in the resonators located in the head.

Some of these “resonators” aren’t places in the head, per se, but spaces in the head, or even just a sensation you feel. But what you’ll typically feel is pressure or a “focus” point moving higher and higher in your head. Sometimes between the eyes, sometimes in the middle of the forehead, or even around the top or back of the head.

As for me, I often feel like the pressure of the sound is going straight up into the top of my head. It’s kind of weird to describe, especially typing it into the computer.

“So, how do I get in touch with my head voice, Natalie, and then help those parts of my range connect?” you ask.

Well, I say, “Two exercises can help get you started in that direction.”

First, try the Fire Engine, which I described in a previous post, “Getcha Fire Engine On.”
Second, try “the Yawn/Sigh.” Get yourself in a position ready to yawn, as in with the soft palate in the back of your mouth, at the opt of your throat, nice and high. Then, like you just finished a wonderful nap, go right into a sigh from the highest you can go and “slide” right down to the lowest note you can make.

Over time and with practice of both of these, you’ll get the feeling of how you can connect your head voice with your chest voice.

Then, you’ll strengthen your head voice and connect it to your chest voice with some practice and some other vocal exercises. And, you’ll be able to use both belting and falsetto in your vocal repertoire, but as “tools in your vocal toolbox,” rather than because you’re unable to do anything else.

Until next time, keep singing and playing!

Thanks for reading,
Natalie

Ukelele Rhythm/Perc, Bass, and Rhythm – All at Once!

AHN guitar students: check out James Hill… https://youtu.be/dEDHdBG_5ac Doing all those elements of “Billie Jean” simultaneously – on a ukelele – just… wow. Try just one of those elements on your guitar tonight! 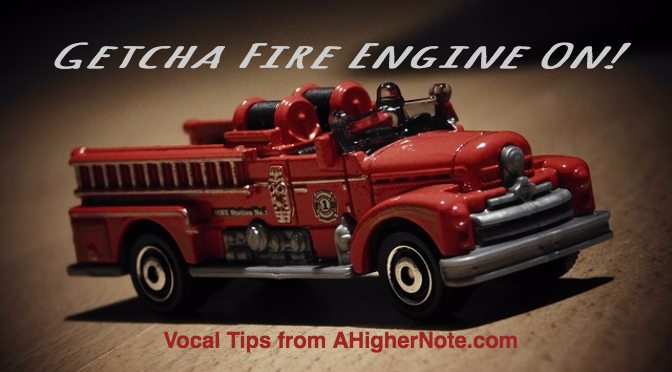 Getcha Fire Engine On! A Warm-up Exercise That’ll Save Your Voice

“Huh?” you say. Yes, I say. Getcha Fire Engine on, my friend! I first learned this great vocal exercise from a voice teacher in VA, named David Troup. I’ve always liked it for its usefulness Read more…