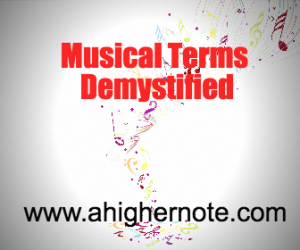 What Is It? Vocal Passaggio

A Vocal Passaggio is a portion of a person’s vocal range in which the larynx must shift in order to accommodate “passage” to another vocal register.

Some Background Info and More Explanation

To understand vocal passaggio, I’ve found it’s easiest to describe what’s happening physically. As a singer sings along in his or her vocal range, say heading from low to high, the laryngeal muscles are constantly lengthening and stretching the vocal chords. The larynx makes many adjustments and the voice moves through several smaller or “secondary” passages. But let’s talk for a minute about the big passaggio all voices move through.

The Big One: The Primo Passaggio

While the singer’s voice moves either upward or downward in pitch, the larynx shifts to lengthen, shorten, and/or thin the vocal chords and, thus, change the pitch. At a certain point, though, it has to make a big shift so the singer can enter what essentially amounts to the “other half” of his or her range. When moving upward in pitch, the larynx hits a point at which it physically can not lengthen the chords any more – it has gradually tilted and tilted and tilted to make room, but it has now run out of space and stretchiness. Just think of the mouth of a balloon getting to where it can’t be stretched anymore. The larynx does a “magic trick”: it shifts back toward its normal position and it actually partially cuts off the flow of air so that the pitch can move higher. Again, thinking back to the balloon example, think of a balloon you’re making “squeal” by pulling the mouth tightly so the air has to squeak by in a high-pitched whistle. Then, imagine grabbing the already-pulled mouth in the middle and closing off half of the opening – the pitch goes from an already-high pitch to a really-high pitch. The larynx does something similar.

To Manage or Not To Manage the Passaggi?

For the minor passaggi, you don’t really worry, or even think, about them. You’ll sing through them just fine. The primary passaggio, however, has presented issues for many people. Many of my students have referred to their primary passaggio as the “break-point” in their voice as they go up or down in their range. Typically, it bothers them and they don’t like it. Their voice isn’t literally “breaking,” although the larynx’s biggest shift, if not understood, appreciated, or managed well, can cause a “bump” in the vocal production as the singer moves along.

For some folk, rock, or otherwise non-classical-genere singers, and for yodelers, the “bump” or “flip” place is not only not eliminated, but is celebrated, used creatively, and shown forth in all its glory.  In classical voice training and in many contemporary vocal methods, considerable time, energy, and education are given to moving the vocal sound seamlessly through the range. The understanding and work involved aims at minimizing or eliminating altogether the sound of a “bump” or “break” in the voice, as well as any significant change in the timbre of the tone. The goal is always to maximize the resonance, power, fluidity, and flexibility of the voice in each of those registers as the singer moves from one register into another through each passaggio.

What’s your one thing?

Today's tip is a rather motivational, helpful tidbit, prompted by a letter from a mastermind colleague of mine, Dr. Bruce Hoag. This will help you learn to think differently – more strategically, more fully, more creatively...better – when it comes to prioritizing and GETTING YOUR BEST VOICE.

The Motivation Summit – Your Reflections

Are you attending the Motivation Summit I told you about? I hope so. That’s where more than 20 experts have come together to create an amazing collection of interviews and training that will inspire you Read more…

The more I learn about Nadia Boulanger, world-changer and massive influencer in music composition, the more interesting she gets, and the more I admire her.